I like films, a lot in fact, however as I’ve gotten older certain things have started to piss me off. Not to the extent that I love the medium any less mind you more that I’m just becoming more cynical about films so I thought I would share a run down of those factors. Please bear in mind that these are just my opinions.

Cinemas – Let me be clear I love the cinema, there’s nothing like seeing certain films on a big fuck off screen. That being said there are a few aspects that put me off, the principal of which is the price of everything – it’s just short of a tenner for a ticket these days and that’s not factoring in any snacks, which is frankly nothing short of extortion. Sure they do the unlimited cards which is essentially something like £15 a month (with snack discounts) however to me then there’s almost an obligation to go and see any old shit that comes out just to make sure you’re making the most of that monthly expense. The secondary factor is other people, now let me add the caveat that probably 99% of people are fine and have no impact on me, it’s the cunts that either make loads of noise all through the film or spend the entire kicking the back of your seat when all you want to do is lose yourself in the film, this isn’t helped with my being far too passive aggressive to actually confront someone about their behaviour.

Unreasonable running times – For me 2 hours is about the right time for a film, the further you get away from that the more I’m likely to piss and moan. If you have the temerity to actually make a film that is significantly over this length and still manages to feel like it needs more time for the plot points that have been brought in to actually make sense then you’ve fucked up as a film maker in my eyes. And if you go for a 3 hour film (or a trilogy say) and have the audacity to pad it out with shoehorned in bollocks then I’m not going to be impressed, not by a long shot especially if said ridiculously long trilogy happens to be based on my favourite book of all time and you somehow manage to leave out my favourite scene in favour of lots of things that don’t actually bloody happen in the book! That dog won’t hunt I’m afraid.

Needless sequels – You’ve made a film that’s a surprise hit and and which genuinely feels fresh, what’s your next move? If your answer is turn it into a trilogy and film those 2 sequels back to back then I suspect you’re a Hollywood executive. In my personal opinion (which I appreciate means fuck all in the grand scheme of things) these sequels rarely maintain the charm and freshness of the original. They always seem to try and expand the lore of the universe but lose the focus on what made the original so good. You could also include milking a franchise into this as well, whereby you take a series which has actually done well and churn out sequel after sequel and hope that the brand sells it even if it’s a steaming pile of shit, and it’s very rare that once the decreased quality sets in and audiences stop paying that the slide can be arrested, Die Hard 5 being a particularly prominent example of this phenomenon. 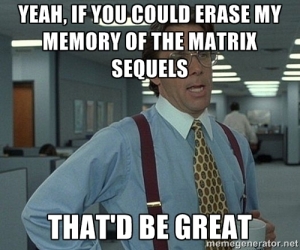 Logic gaps – I’ll add the disclaimer that if you make a film that sucks me in that I’m actually capable of letting even the most preposterous gaps in logic slide however normally at best your film will be described as flawed. I hate it when films treat you like an idiot, be it using a preposterous deus ex machine to sort things out or just assuming you won’t think about how something actually makes no bastard sense whatsoever. The Dark Knight Rises is the most recent example of this, Batman has his back broken and is cured in a matter of what seems to be a couple of months, no physiotherapy or anything, to say nothing of him escaping from a prison in a foreign country and some how rocking back up in Gotham suited and booted despite the fact that he has no money or other assets anymore, it makes zero sense. 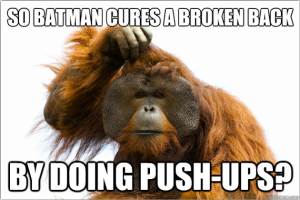 Unnecessary tonal shifts – If you’re going to create what is at first glance a fairly interesting tale of revenge, don’t then utterly ruin it by ramping up the violence to cartoonishly ludicrous levels, it’s not big and it’s not clever. Pick a tone and have the courage to actually stick with it, I really do prefer a consistent tone to a film. This is a favourite of Quentin Tarantino and part of the reason I tend to not enjoy much of his more recent output, Django Unchained in particular really annoyed me as the first half was astoundingly restrained and really interesting, with some really good character development but then the second half just degenerates into a clusterfuck of over the top violence and just really made me wish I could’ve seen the film that the other half was threatening to become. 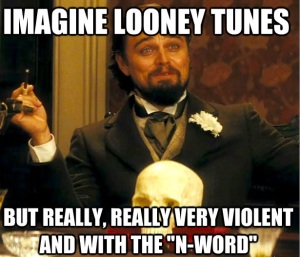 Overhype – Now this one is predominantly my own fault as there will be films i’m supremely hyped about and as a result I will devour as much information as possible prior to the release, this has the upshot of potentially ruining any surprises by accident or of burning me out before I even see it, thus making it feel more like a chore when I do get round to seeing it. While I admit a degree of culpability, it’s not helped by the sheer amount of information released, be it trailers or articles, and the fact that it’s all so readily available on the internet. And that’s to say nothing for the utter cunts that feel the need to post spoilers online or just outright tell you to your face and ruin it for people, which coincidentally enough is how one of the greatest modern film twists was spoiled for me as a guy I worked with at the time told me the ending to the Sixth Sense, needless to say he received a lot of abuse for that. 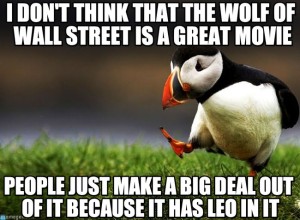 Anyway that’s my list of things that piss me off about movies, if I’ve missed anything or you just fancied sharing your own feel free to let me know.